Although the maps made today’s route look quite flat, we spent most of the morning in our granny gears on a gradual yet constant uphill. But we had some lovely scenery to accompny us. 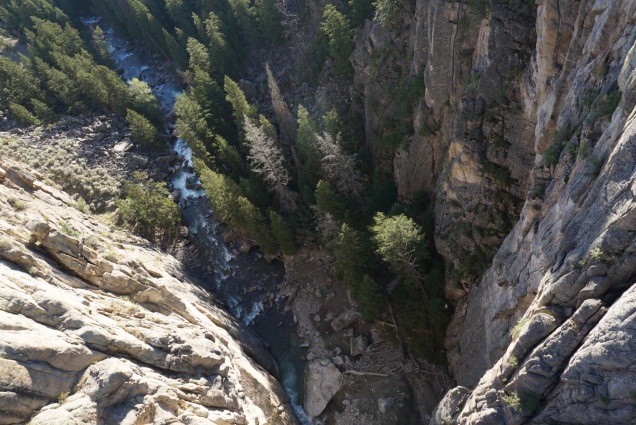 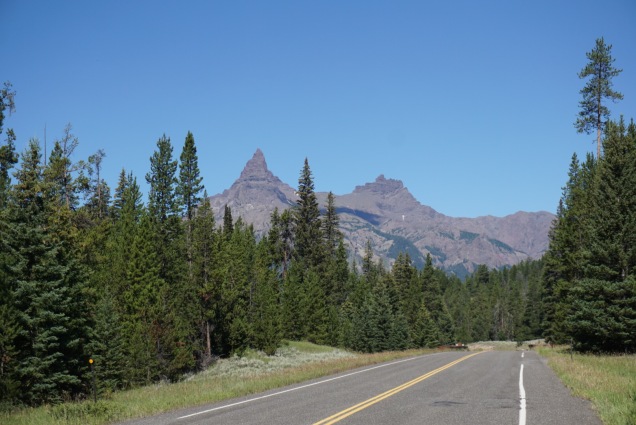 About 5 miles before stopping in Cooke City for lunch, we found ourselves at the border between Wyoming and Montana! It was such a great feeling to make it to a new state.

We really enjoyed Montana for the short time we spent there. It was all downhill soon after the border, so we cruised down into Cooke City – “The Coolest Small Town in America.”  Burlington still wins, but it was a great little place. One street lined with restaurants, shops, and inns. We bought lunch at a cafe, then relaxed and wandered for a little while. I came across some pretty wonderful ice cream that (shockingly) was in a gas station. Of course I had to have a cone.

We loaded up our panniers with more cereal, beans, and Annie’s mac n cheese, and we were on our way again. I hadn’t realized how far we’d climbed this morning until we spent the next 25 miles going mostly downhill! We crossed into Yellowstone National Park (back down into Wyoming) then continued down a lovely road to a wide open valley. There is certainly a reason why so many people come to see this place. 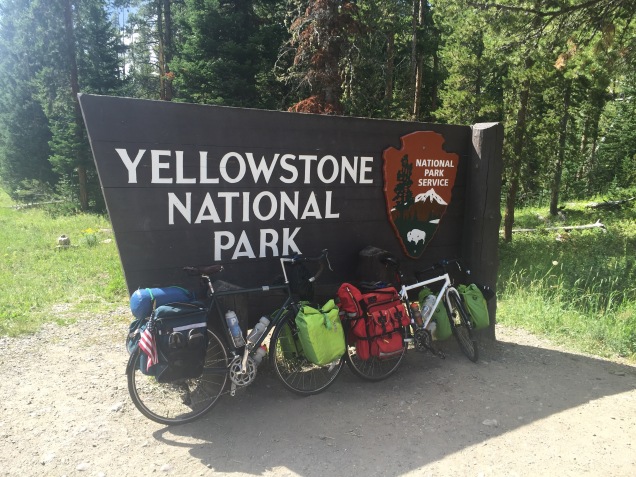 We were biking along, enjoying the views, when a dark patch in the field caught my eye. As we slowly approached, we realized it was not a bear (as I had first imagined) but a bison! First one either of us had ever seen. We’d heard to watch out for them, because angry bison are not fun. But since he was lying down looking very peaceful, we passed him with no trouble. There was a brief time of very fast pedaling just after we’d gone by though.

We soon learned that our first encounter with bison was nothing. We came over a hill and saw a giant herd of these enormous animals to our left. And a few of them were crossing the road a little ways ahead! 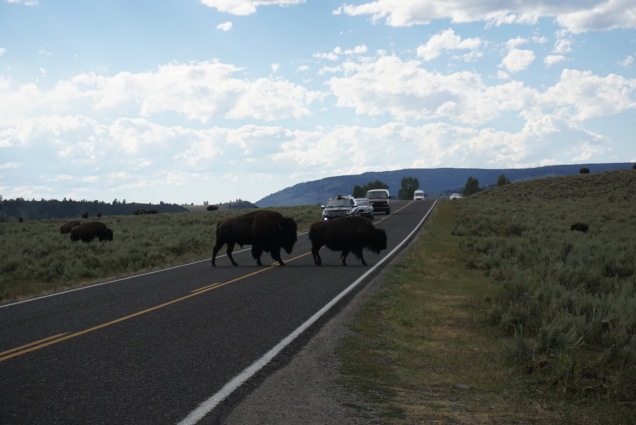 There were a number of cars stopped, so we stopped near them and when the bison had moved off the road, we followed closely behind cars as they drove the newly empty road. We passed more herds along the way, and Aidan got some nice photos! 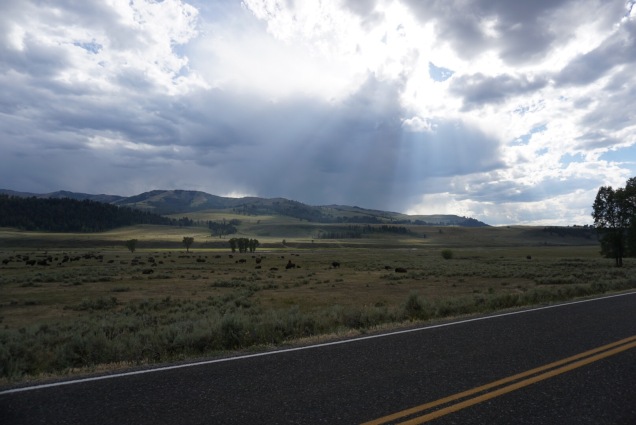 The bison, it turned out, were not the last wildlife experience of the day. We were pedaling the 2.5 miles down a gravel road to our campground (camping is always open for hikers and cyclists apparently, so we were able to ignore the “full” sign), sagebrush and sandy soil all around us, and I was about 30 feet behind Aidan. A coyote came cruising out from the brush, and ran straight at me! I mean straight at me. I swerved slightly, cursed majorly, and pedaled faster than ever. The coyote was literally less than 5 feet away from me, and started running after me for a few extraordinarily long seconds. During those seconds, my pedals spun many a time, and I glanced back over my shoulder at the animal that could most definitely (I was certain) outrun my bike. I also called to Aidan, who saw the tail end (no pun intended) of the little episode. My friend the coyote veered off from my path, and disappeared into the sagebrush on the other side of the road. I could feel the adrenaline for quite a while after that… I probably could have biked another 30 miles!

Luckily we were equipped with zipties. They saved us when part of the frame of Aidan’s bike broke near the rear pannier rack. Without those, the weight of the pannier pushed the bolt into the gear sprocket! Not something that we could get very far without fixing. 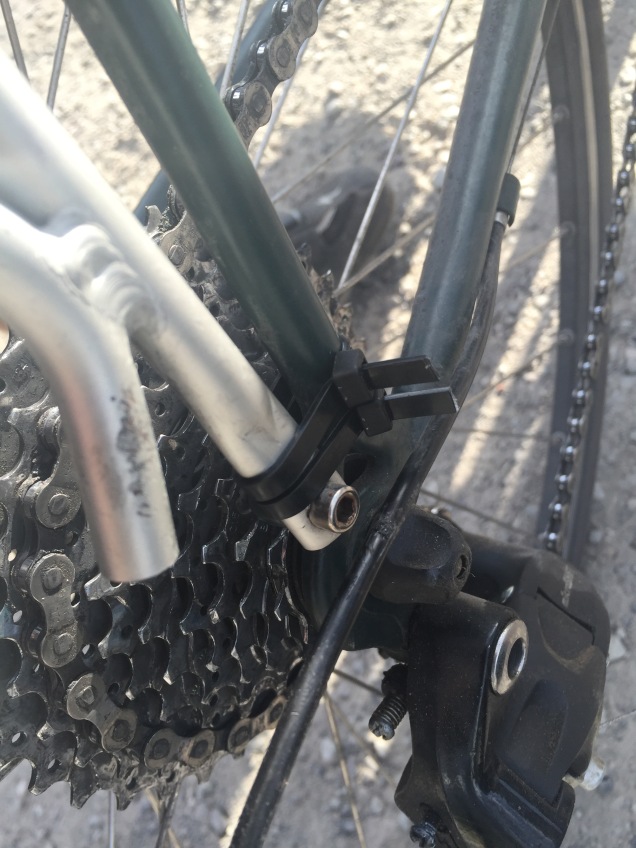 Although we don’t need reservations to camp in Yellowstone campgrounds as bikers, we couldn’t find an area designated for us non-motorized vehicle folks. But as we biked around checking out the scene, two people offered to share their site with us! So we took the first offer, and our gear is stashed away in a bear box. Thank you to Che and his daughters for being so friendly!

Bear spray close at hand, we’ll fall asleep to the sound of the creek, and plan to sleep in tomorrow until 6:00 – what luxury!