Since we had biked into the night, riding in the early morning was not an appealing thought. We also wanted to both have a chance to bike up to the visitor center and to sit in the shade during the 100 degree hours. So we slept in, woke up for breakfast after 9:00, then took a nap soon after. But of course we woke up for food again.
This was a day full of meeting interesting people. The first was a woman from France, who now lives in Canada as a National Park Ranger! We started talking to her about our trip, and learned that she has done a good deal of bike touring (she has the same kind of bike as I do – a Trek 520!). Aidan and I agreed that she was one of the coolest people we’ve ever met. She used to be a sponsored rock climber, who actually climbed Devils Tower once! Also, being a park ranger, she knew all about how to go about dealing with the potential danger of grizzly bears. We feel much better prepared now, both with information and with the can of bear spray she gave us!

Just as we were packing up our tent to head to the visitor center, a couple pulled up to the site next to ours to set up camp. They are bikers too, and totally understood our near worship of food, and presented us with four absolutely beautiful Clif bars!  Our expressions must have been quite entertaining.

It was about 2 miles of winding uphill to get to the visitor center at the base of Devils Tower, and we were thankful to have stayed so long at the campsite. It was after 5pm, but was still almost 100 degrees. I looked up at the monument, thinking about how amazing it is that people have climbed it! My Aunt Susannah’s dad was one of the first to accomplish that, and she still has the letter he wrote to the government for permission!

While we were at the visitor center, just before we left, a woman lost her balance and fell on the brick walkway just a few feet away. Aidan was the first one to react, and was instantly by her side, asking the questions we’d learned to ask in our Wilderness First Aid class. She was able to talk perfectly normally, and was aware of person, place, and time – all comforting signs. But she had hit her head pretty hard against the ground, and was bleeding. Someone else nearby found a ranger who was well equipped with a backpack of first aid supplies, while I found her husband. Aidan and I left soon afterward, and although the whole situation was well under control, we were both shaken up by the incident. We felt confident that she was okay, but it was still an intense experience – especially for Aidan, being the one initially helping her. The ambulance passed us in both directions, so that was definitely on our minds for the whole ride this evening. It was a good reminder about the value of the WFA class – we are more prepared not only to take care of ourselves on this expedition, but also others – at least until someone more qualified comes along.

We saw two species of wildlife today that were completely new to both of us. There were prairie dogs all over in a few of the fields near the monument, and were ridiculously adorable. The most exciting one of the day though was a badger! We stared in amazement, and the badger stared back – until we got a little too close and he ducked into a burrow! 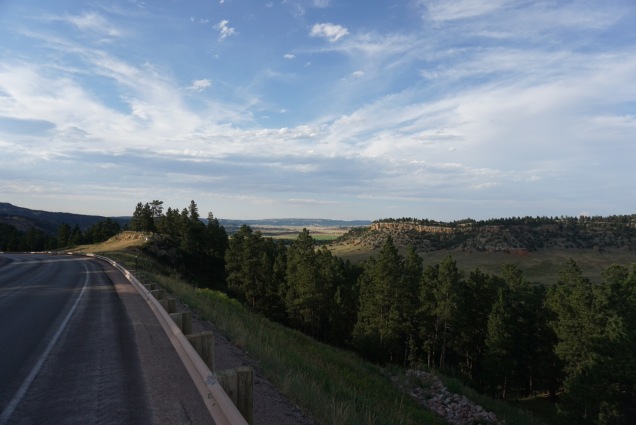 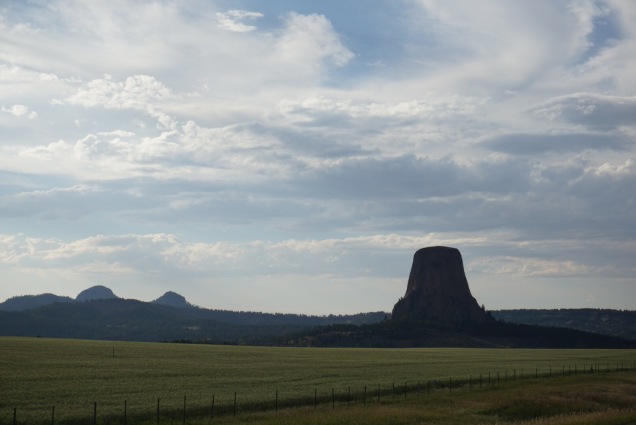 To continue our day of meeting cool people, we stopped at a group of people by their mailboxes to ask about a place to put up our tent. The couple who was there fixing their mailbox offered to let us stay on their land, less than a mile down the dirt road! So we biked down to their house (one of the ones we had been admiring from the road) and we set up camp with a canyon view. Dan and Val were so welcoming to us. They invited us in, and offered us fruit and veggies (pretty hard to come by while biking), warm showers, and laundry. Truly all we could possibly have wanted. Thank you both for your hospitality!!

I did have the sad experience of opening the pocket of my pannier where I keep my beloved spoon, and realizing that I’d left it behind at our Devils Tower campsite. This really hasn’t been the trip for utensils. But maybe, somehow, my spoon will find its way back to me like Aidan’s (we’re close to where his spoon was mailed to!), or maybe it will find a new owner.