We woke up at the golf course and had to dodge the sprinklers again, but managed to stay almost completely dry. The lawn mowers were just getting started as we pedaled away! Perfect timing. 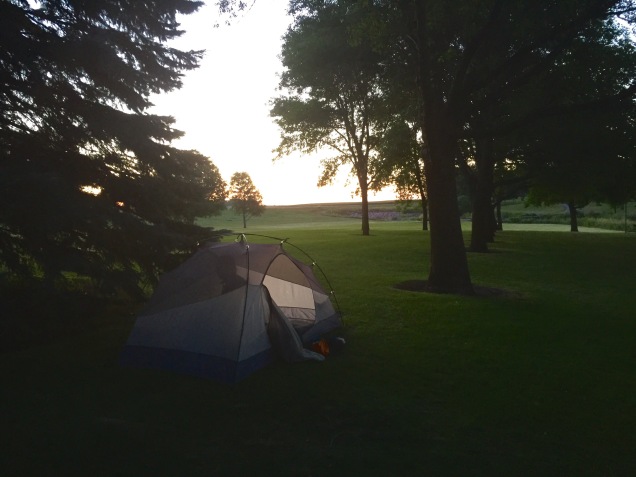 We ate breakfast on the side of the road, where we realized Aidan’s beloved spoon had been left behind at last night’s dinner spot. I’ll let him describe the events following that sad moment of discovery.

It was a sad moment when I realized my spoon was gone. My oldest brother Michael carved it as a birthday gift last winter. Since then, it has accompanied me on many expeditions, collecting scuffs and memories along the way. I was not going to let this one go easily. I googled the business whose land I believed it was lost on the previous night and called them up. I described our trip and my spoon, prefacing the conversation with “this is likely the weirdest question you will hear all day, but I think I left my spoon in your yard.” She was able to find it and will be mailing it to none other than the post office in Powell Wyoming. By coming so close to losing this essential piece of equiptment it made me notice how connected to these everyday items I have grown. After spending so much time with my headlamp, knife, sleeping bag etc. they start to develop personality. I appreciate a tool that I can always count on to get the job done in style.

When we filled up on water this morning, we saw that there were showers in the bathrooms – that was the second place in South Dakota where we’d noticed that, so we asked if that was typical. It turns out that showers can often be found at truck stops, so we now know to keep an eye out for those.
A few of the towns we passed through made Monkton, VT seem like a city! 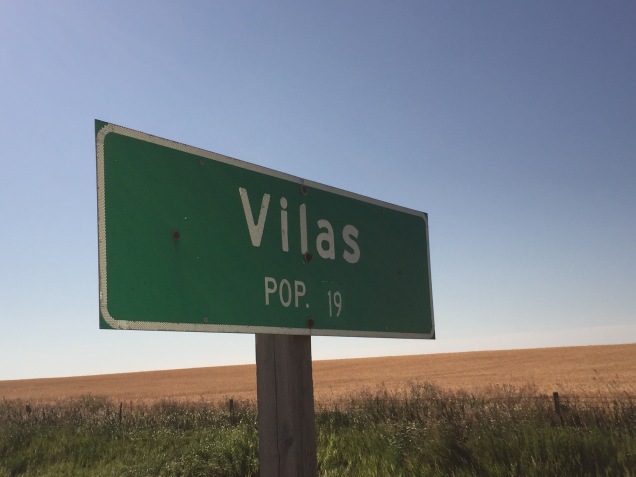 Yes, that does state that the population in Vilas, SD is 19.

When we finally stopped for lunch, we had just reached a town where we were hoping to find one of those truck stops so we could clean up, and we were delighted to discover a town pool instead – free to use! When I came out of the shower to our bikes, this is the scene that I was met with.

Aidan had made friends with the group of little boys running around the town with bikes and an incredible amount of energy. They were so excited to tell Aidan all about their dirt bikes, and they did their best to convince him to race them down the road.

Most of the riding today was almost perfectly flat, but the 17 mph headwind slowed us down a bit. But there were some fun sights by the road every now and then!

We got yet another lovely evening ride in, and we were pleasantly surprised to find some little swells in the landscape, and over each one we were met with a stunning view of South Dakota. 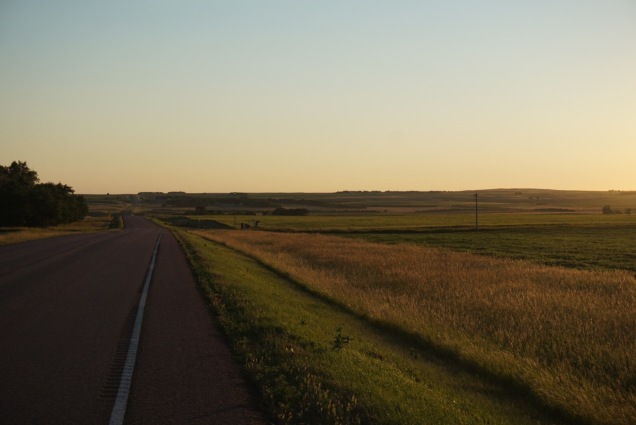 We’ve found what is possibly the best campsite yet of this trip! Okay, we’ve had some other great ones, but we’re quite excited about this one. Just after passing a field of cows and noting that it was lucky we hadn’t hopped over a fence to camp, we found a field clearly not in use! The sun is setting still, the moon is out, and we have a 360 degree view of the colorful and darkening h﻿orizon.